I’m slowly coming to the realization that cars don’t make any sense. I don’t mean cars as a whole as transportation, but types of cars and the models that make up those types. They all seem to be constructed as a series of compromises that are made either because of road laws or keeping costs under control. Even hyper-cars like the Porsche 918 or the Pagani Huayra need to have turn signals and airbags installed, and while they may be fast around the track, they would both have to turn over all of their lunch money to a purpose-built racer. They, and cars like them, are also pretty bad at doing things that something like a Golf could do without much effort, like toting a couple cartons of milk AND a bag of Cheetos. Or even a third person. The same could be said about the Golf, actually. It’s a wildly practical car, but despite claims to the contrary, it isn’t very sporty, nor is it the cheapest, or even the most practical.

Unless they are driving the Type-R, then they would be excused for not noticing as they are obviously oblivious to style.

This is why manufacturers have different models to choose from. They know full well that they cannot meet the needs of everyone all the time with one car, so they compromise in the hopes that the consumer will as well. This is the case for every car maker on Earth, except one: Rolls Royce. Yes, Rolls has multiple models on offer, and Jakub Kucharski taught us that they also have an unlimited number of custom options. But what really sets Rolls Royce apart from the bunch is its SUV: The Cullinan. Surely by now you have seen pictures and heard tell of this palatial luxury utility vehicle, but in case you have been under a rock or just plain uninterested, what Rolls Royce has done is build the first car in history that makes any sense. 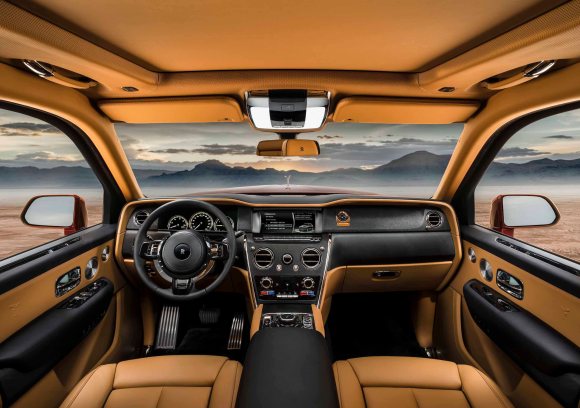 What I mean by this is, there is no confusion as to what it is. It looks vaguely like an off-roader but in no way gives off the air of one. The Cullinan looks correct. It looks like luxury. It’s as if Rolls finally realized that in order to haul around the world’s supply of opulence they needed something bigger. A standard sedan or coupe just doesn’t occupy enough real estate to be considered genuinely sumptuous. The Cullinan is where the League of Nations would have met at the end of World War I had Versailles been unavailable. They might have convened in a Cullinan anyway, as not even gold ceilings and halls of mirrors are as impressive as what the Roller possesses.

It has suicide doors. This doesn’t provide weight savings for sportiness, or any utility when taking it to the shops. It just makes ingress and egress easier when pulling up to your palace. It has a clock in the dashboard that doesn’t make any sense, but would look all wrong were it not there. It has swivel chairs on its folding rear gate, raising both the amount of class and comfort in equal amounts when enjoying your caviar and champagne. The Range Rover has a place to sit as well, but the Rolls “Viewing Suite” with its motorized unfurling action makes the Range’s accommodations feel like a craggy boulder in comparison. It’s the worlds only SUV with a partition from the luggage. It has an off-road button, but I assume that will only be used by your driver when pulling out of the boat launch having deposited you and your Riva Aquarama in Lake Como.

The Cullinan is a difficult thing to call pretty. Especially when compared to the Riva. However, I think that actually adds to the point I’m trying to make. It’s not meant to be the object of an outsider’s desire, it’s intended to submerge the owner in a sea of superiority. The size mixed with the angular design forcibly drives this point home when pulling up behind a used Civic at a stop light. There is no chance that the driver of said Civic doesn’t notice what has arrived on their rear end. Unless they are driving the Type-R, then they would be excused for not noticing as they are obviously oblivious to style. Plus the various obstructions obscuring the rear-ward view makes it impossible to see what’s back there anyway.

Plainly then, the Cullinan is the epitome of no-compromise ultra-luxury that Rolls has been known for forever. In a world full of half-hearted efforts to be as average as possible, this is a full-measure effort to stand out that I think Rolls-Royce have pulled off. And while this is a vehicle that I probably will never actually see in person, let alone be in, it brings me a great deal of comfort knowing that there is at least one brand that still knows exactly what the world needs from them.

Van enthusiast. Wishes they were all electric, though.

This site uses Akismet to reduce spam. Learn how your comment data is processed.